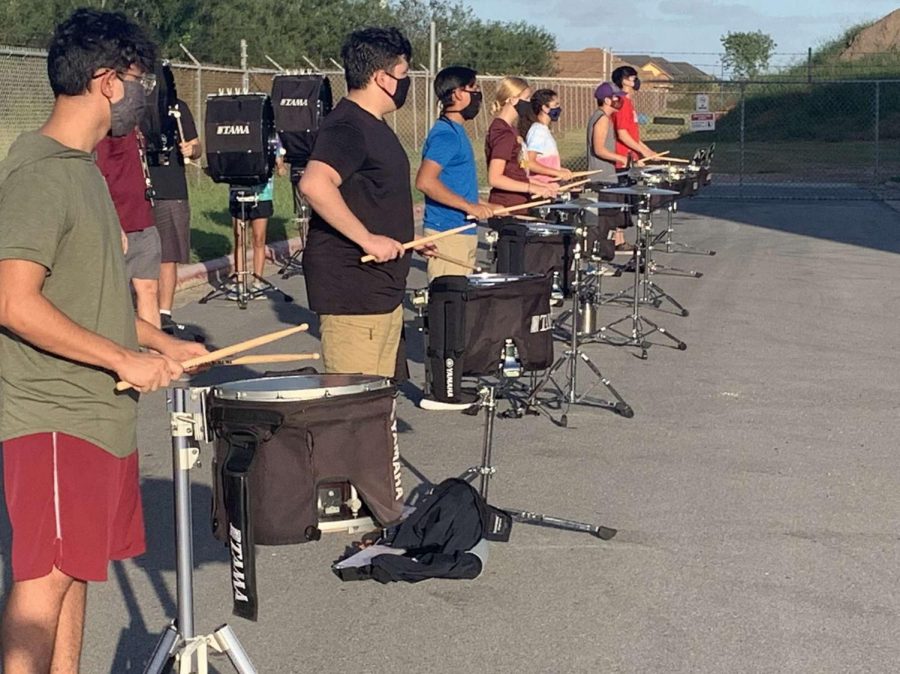 At LFHS the Falcon band is given much pride for their marvelous performances during the football season and the events throughout the year. However, during these hard times, the band is greatly affected. With an interview done with the headband director, Andy Salois, we are given an opportunity to truly get a view of what the band is going through.

As you could only assume, the band would struggle greatly due to the fact they are playing instruments through an online program meant for primarily talking. Not only would internet connection have a great impact but the fact that the program itself wouldn’t pick up the students playing, creates a big challenge for the band as told by Salois. With each class averaging around 45-70 students per meeting, it is almost impossible to work one-on-one with each student. Currently the band is focusing on individual visual work such as building and maintaining visual vocabulary with teaching and refining basic marching techniques. During each class with most interaction being one way from the instructor, click tracks (constant clicking in beat) are played through the class meetings and students are given reminders on what to focus on and hear for certain points. So far into this semester, it is notable to mention that having recorded videos sent for critiquing is the best way to give direct feedback.

Due to the pandemic, everyone is used to hearing about the six-foot distancing and the wearing of masks. However, for the band, they not only have to follow these guides, but also additional ones set for the band specifically. They have included making their own masks that would be fit for both keeping the students safe and able to play. The mask includes your standard mask but with a slit cut that can close and open with velcro. As for their instruments, they are given bell covers that prevent anything but the sound from coming out of the instrument.

As you could only expect, the band would also have to suffer the loss of some events. For this semester, the band will not be participating in any competitive marching events, including UIL Region 28 “Pigskin” Marching Contest. “It’s important to be aware of the level of concern that this situation warrants and plan accordingly,” states Salois as his viewpoint of attending events. They might not be able to participate as much but they truly do try to celebrate the small wins. After 7 months, 10 days, 2 hours, and 35 minutes (as counted by Salois) the band was able to play once more at the home football game. They will continue to show appearance at the home games this fall.

The band is known for creating a family-like bond between the students and directors that brings everyone together. To them, the music they create forms a type of culture that they can all relate to. Within each practice, event, lesson, and competition there is an experience gained that will last with each one of them a lifetime. However, during these hard times, it is hard to create that connection. There is only so much you can do through the meeting calls that suffer from an internet connection and mic failures. Verbally appreciation for choosing this path might not be able to be spoken clearly, but it is able to be said that the effort put in to still manage remotely is enough to tell how important this is to the directors and students. For the band seniors, as this is not their first year but their last year with the band they know exactly what it means for needing to stick together through these hard times and stay positive. “They are a wonderful group of young adults whose leadership continues to be outstanding,” as stated by Salois.